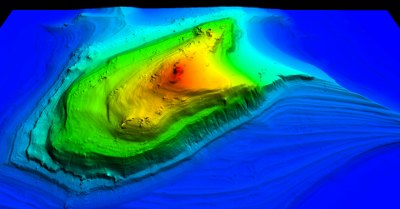 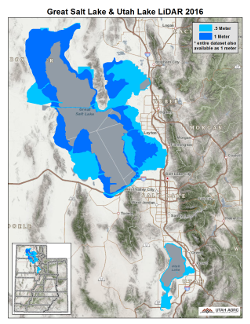 During the Fall of 2016 UGRC, Utah Geological Survey, and the Utah Division of Forestry, Fire and State Lands acquired ~1,555 square miles of 2 and 8 ppm Quality Level 1 and 2 LiDAR of the Great Salt Lake and Utah Lake. The GSL portion of the project, collected between September and November 2016, is a combination of .5 QL1 and 1 meter QL2. Some areas are available as .5 meter although the entire GSL project areas is available as 1 meter. During the acquisition the GSL was at a historical low. The Utah Lake portion, collected between October and November 2016, is all .5 meter and is mainly the lake shoreline. More LiDAR around Utah Lake can be found in the 2013-2014 collection. The .5 and 1 meter resolution bare earth DEMs and first-return/highest-hit DSMs in .img format have a 10.0cm vertical RMSE accuracy and are available for download. The LAS classified point clouds are available from The National Map, Open Topography, or by request from Rick Kelson from UGRC at RKelson@utah.gov. This elevation data has a UTM NAD83 (2011) zone 12 north meter NAVD88(GEOID12) projection.

The naming convention for the tiles are based off the U.S. National Grid (USNG).

Comments, questions, compliments, or concerns can be directed to Rick Kelson from UGRC at RKelson@utah.gov.