The largest change was made to reflect the commitment that USGS has made to lead and fully fund the acquisition of the Uintah Basin and Heber Valley areas that were included in Utah’s proposal. The boundaries of these two areas were adjusted to fit the new 3DEP 1 kilometer tiling grid. The boundaries of the remaining adjacent project areas in Utahs’s 3DEP proposal were also similarly adjusted. Additionally, the boundary for the areas to be contracted by USGS were modified for acquisition efficiency, including the addition of Dinosaur National Monument.

It’s important to keep in mind that we’re still a month or two away from any preliminary or final funding decisions on Utah’s proposal. Eggs should never be counted as chickens. However, the Utah partnership is sharing this updated proposed project area map in advance, in an effort to promote coordination and avoid potential duplication of effort in these areas. 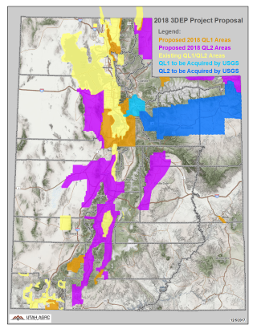 A shapefile of the proposed Lidar coverage areas is available for download.