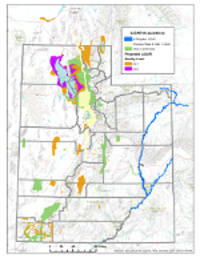 In October 2015, UGRC, in partnership with local, state, and federal partners submitted a proposal to the U.S. Geological Survey’s 3D Elevation Program (3DEP) Grant program. The proposed project will acquire QL1 and QL2 specification lidar and elevation data in Northern Utah and other areas of interest. UGRC received notice that the proposal has been recommended for funding and the partnership is preparing for a Fall 2016 acquisition. The proposed areas in the graphic are subject to change.