Good news, 2020 census redistricting data is now available for Utah in easy to use GIS formats!

In mid-August, the Census Bureau published the PL 94-171 Redistricting Data Summary Files from the 2020 Census. This is a pre-release of the 2020 census data, in legacy file format, and contains the elements that pertain to drawing new congressional districts and state legislative districts (state senate and house).

The primary data characteristics released are for most geographies, down to the block level, and show:

The Census expects to release this redistricting data in more user-friendly formats on September 30, 2021. The full 2020 Census summary files will be released sometime in the not-so-distant future (no announcement from Census yet). The more detailed files were released starting in October of 2011 for the last census, but this decade’s release has been 5-6 months behind schedule so far. So make your own guess and cross your fingers.

In the meantime, UGRC, with collaboration from the Analytics Group at WFRC, has worked with the mid-August release and has created ready-to-use GIS data in several formats that hopefully make the 2020 redistricting data easier to use.

The exciting news is that key elements from the PL 94-171 Summary Files are now available in the SGID Utah Census Blocks 2020 GIS layer. These elements combine the primary information pieces from across the summary file tables and employ more user-friendly field names (for shapefile users) and field aliasing for geodatabase users. 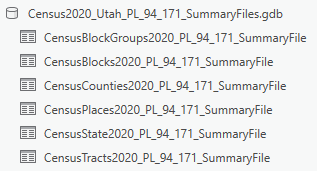 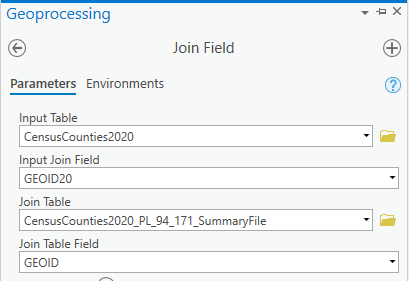 Note that the field names in these tables follow the traditional census field naming convention. You can find detailed information on field names, including descriptions, in the Census PL 94-171 technical documentation or in Excel spreadsheet format.

Additionally, the Analytics Group at WFRC streamlined the race fields in the 2020 block data and made it available for download. This tabular data can be joined to the CensusBlocks2020 GIS layer using the GEOID field. Here’s a bit on the methodology that was used:

While PL 94-171 Summary File data is released under the banner of redistricting, let’s not overlook that it’s the first wave of census demographic data and it’s open for use in any scenario that you can dream up.

You can find more information on this data, including how to access it, on the UGRC 2020 Census data page.

If you have any questions about the data or the processes used, please reach out to Bert Granberg from WFRC at BGranberg@wfrc.org, or Greg Bunce from UGRC at GBunce@utah.gov.