For the past six months, UGRC has been using Travis CI to automatically test and lint our projects each time we push a commit to the associated GitHub repository. Even though we run these tasks locally it's been helpful to have them run on Travis for when we miss things. It's also a major step towards automated deployments as well as running our tests via something like Sauce Labs or Browser Stack.

The set up is relatively simple. The first step is to sign into travis-ci-.org with your GitHub account. Once you're signed in you can go to your accounts page and see all of the GitHub repositories associated with your account. Switching a repository to "ON" tells Travis-CI to start watching any new commits that you push to that repository. 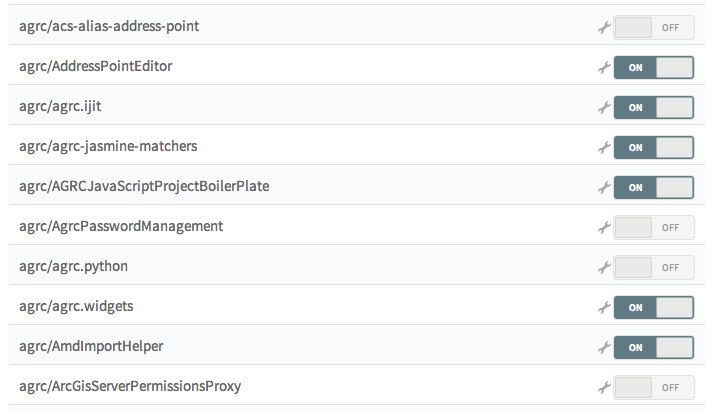 The next step is to let Travis-CI know what you want it to do. The first part of this step is accomplished by creating a .travis.yml file at the root of your project. Here's an example from one of our projects:

The lines below before_install load all of the project dependencies via npm & Bower. The notifications code just tells Travis to only send us emails when a build fails.

The second part to defining what you want Travis-CI to do is to add a scripts property to the your package.json file for your project. Travis-CI automatically runs npm test for NodeJS projects. Adding this new property to package.json defines this command. We use a special travis GruntJS task to run tasks so this is the command for us:

The travis grunt task can contain any sub-tasks that you want. Here's what ours looks like:

The icing on the cake is to copy code from Travis-CI to your app's README.md to show a "build:passing" or "build:failing" (gasp!) badge. You can do this by going to your project's page on travis-ci.org and clicking on the badge in the upper right-hand corner of the page.

After getting everything wired up you'll notice that pull requests automatically display the build status of each commit and will let you know if it is still waiting on a build to run.

If you want to see all of this in action you can checkout the AGRCJavaScriptProjectBoilerPlate repository.