The eighth annual Maps on the Hill (MOTH) event, hosted by the Utah Geographic Information Council (UGIC) and UGRC, was held on March 7, 2019, at the Utah State Capitol to showcase the work of the local GIS community and build awareness of GIS-related issues in Utah. The MOTH event consists of GIS professionals creating maps and presentations to tell a story using GIS. Participants set up easels, large maps, and monitors in the capitol rotunda to inform viewers about the participants’ chosen subject matter. 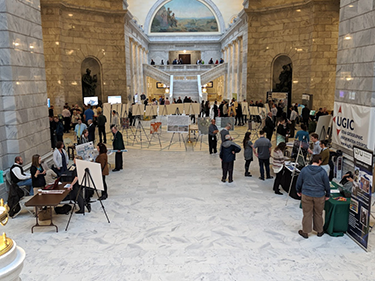 As one participant commented, the MOTH event “highlights the diversity of how GIS and cartography are used in Utah.” This was evident, as the event featured 34 unique map submissions from a variety of local organizations, including Salt Lake County, the Natural Resources Conservation Service, the Utah Division of Emergency Management, and others. The maps’ subject matter was as diverse as the range of presenters, featuring information on the Transcontinental Railroad, flood risk in Utah, Lake Bonneville, Utah’s homeless population, and many other subjects.

With the diversity of subjects and presenters, the MOTH event also shows the unique skill and craft involved in telling a story using GIS tools. As another presenter stated, “Everyone thinks they can take photos and use maps now with their phones, this highlights the skill it takes to make maps and collect data to be used in maps. It’s not as simple as most think.” The presenters were all well aware of this challenge, and their efforts were recognized with “Best Map” awards. The winning maps were the Utah Geological Survey in first place; Salt Lake City Public Utilities in second; and the Department of Natural Resources, Division of Oil, Gas and Mining, in third.

The awards are a great way to call attention to particularly effective map presentations, but it’s equally important to draw attention to the GIS field, in general, through this event. Presenters participated for multiple reasons, such as “because it’s important to be a part of the Utah GIS community,” and because “we felt it was important to have a presence so others could learn what we do, and vice-versa.”

The 2019 MOTH event was a success, and thanks to constructive feedback from the MOTH presenters, we’re hoping to make the event even more successful next year. Thanks to all the presenters and attendees of the event.

To see the map book calendar and photos of the event, visit the UGRC MOTH page.