The basic units of the PLSS comprise the foundation for public and private property boundaries in Utah. The digital GIS representations of the PLSS in the SGID, while in no way a substitute for physical surveys and monumentation, serve as an important supporting reference for surveying and map-based administrative representations of property extents. 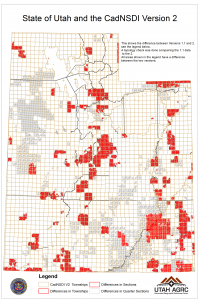 UGRC is also providing derivative versions of GCDB v2.0 that attempt to enhance the usability of this data and correct for a small number of known errors in the latest release. UGRC derived GIS layers that have been updated in the SGID are:

While GCDB v2.0 improves the PLSS GIS representation, there's still significant work to be accomplished. A partial list of process enhancements, that would greatly improve the product and its applications, are: