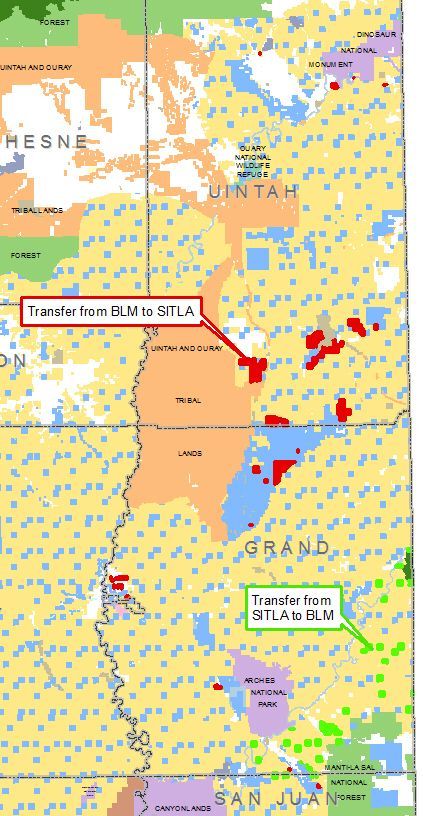 Utah's School and Institutional Trust Lands Administration (SITLA) and the Bureau of Land Management (BLM) finalized a 60,000 acre land swap on May 8, 2014.

As a result, significant land ownership changes have been published to the SGID10.CADASTRE.LandOwnership GIS layer today, May 29, 2014 (Download or View this data). These updates reflect the conveyance of land between SITLA, BLM, and Private ownership.

The Utah Recreational Land Exchange Act of 2009 was signed by President Obama and became law on August 19, 2009. Under the Exchange Act, the BLM and SITLA consolidated land ownership through an equal value exchange of lands in Uintah, Grand and San Juan counties. The exchange protects environmentally-sensitive lands along the Colorado River corridor and helps position SITLA with lands more suitable for development.

Completion of the Exchange Act adds to the 540,000 acres of sensitive lands SITLA has helped to conserve and protect while earning more than $1.4 billion for the beneficiaries of trust lands, primarily Utah public schools.

Comments, questions, compliments, or concerns can be directed to the GIS staff from SITLA at TLA-GIS@utah.gov or 801-538-5100.