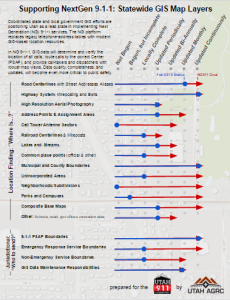 The success of the emergency response process that is initiated by dialing 9-1-1 has always been dependent on understanding and verifying locational information. GIS-based map information will be fully integrated into the Next Generation (NG) 9-1-1 platform. In addition to the geographic context provided in map displays, the legacy telephone-number-to-address lookup tables will be replaced with queries to GIS data to obtain geographic coordinates for addresses. Additionally, queries to GIS data will determine, on-the-fly, the 911 communications center to which incoming calls will be routed.

Highly accurate GIS addressing and emergency response data are critical for NG's success. In a blog post from November 2013, UGRC described what we know about the NG system and how coordinated state and local government GIS efforts have positioned Utah to be a lead state in implementing NG 9-1-1 mapping components. NENA, the 9-1-1 professional association is expected to release a suggested GIS data standard later this year.

In anticipation, UGRC has been working with the Utah 9-1-1 Committee to assess the maturity of statewide map data resources that will be required or recommended, many of which will continue to be sourced through partnerships with local government. These data layers, include, but are not limited to, road centerlines, address points, municipal boundaries, imagery, and emergency response boundaries. UGRC has developed this Google docs-based graphic that summarizes the status, update frequency goals for each GIS data layer likely to be required or relevant to NG 9-1-1.