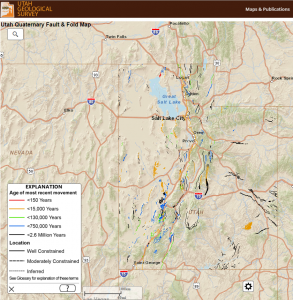 The interactive map’s user interface was built using ESRI’s JavaScript API. Several search options allow the user to locate a fault of interest, or specify a location to see if any Quaternary faults are nearby. Pop-up windows provide a brief summary of important information associated with the faults, as well as a link to detailed reports available through the USGS national database. Users can select from a variety of basemaps including topographic, shaded relief, and satellite imagery. A glossary explains terms used in the pop-up windows as well as terms used in the detailed reports that may be unfamiliar to non-geologists.

In addition to the UGS interactive map, the Utah Quaternary Fault and Fold Database exists as a fully attributed GIS feature class in the State Geographic Information Database, and can be downloaded from the UGRC.