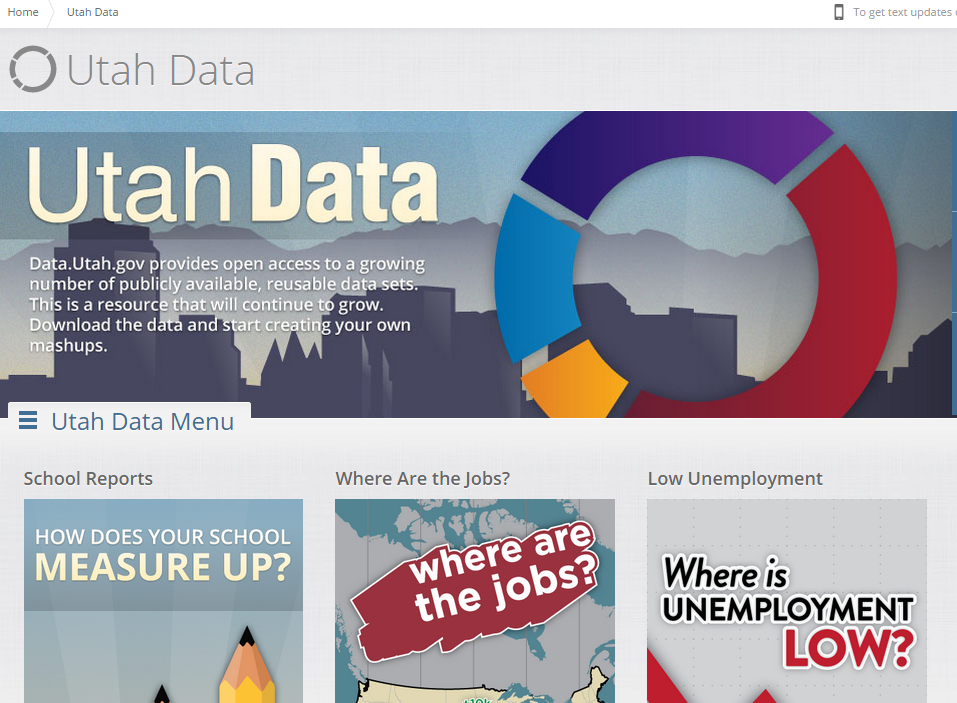 SB70, passed in the 2014 general session of the Utah Legislature, provided funding to create the state Open Data Portal as recommended by the Utah Transparency Board. The Open Data Portal project, staffed by the State's Department of Technology Services (DTS), rolled out its initial release of its data.utah.gov utilizing the Socrata software platform in early 2015.

In many ways, Utah's State Geographic Information Database (SGID), established in State statute in 1991, was Utah's original entry into the world of open data. The collective effort of state agencies, local government, and even the federal agencies, to share digital mapping (GIS) data is now a decades long success. The new Open Data Portal has already begun leveraging content from the SGID.

With every state department asked to contribute their priority datasets, the Open Data Portal website is delivering diverse and valuable content in its first months after launch. Much of this data is in 'table format' (.xls, .csv, etc) and some is already location-enabled in a native GIS format from existing or new SGID map layers.

Unquestionably, one of the goals of the Open Data Platform is the integration of information across datasets. Using the platform's built-in tools and API's, users can employ geographic location and other important integration factors to analyze and view data across programs and agencies.

With all this in mind, below is a top 10 list of SGID GIS data layers that are expected to be most valuable for data integration, analysis, and verification within the open data platform:

9. Energy Resources: Energy development and distribution, including conventional, unconventional, and renewable sources, is critical to economic activity and is a significant source of revenue to state and local government. The SGID contains nightly updates of permitted oil and gas wells from Utah's Division of Oil, Gas, and Mining (DOGM) as well as renewable energy zones, other natural resource map layers, and power generation facilities.

8. Road and Highway System: Surface transportation is important to all Utahns. In particular, roadway performance data is critical to UDOT, Highway Patrol and local law enforcement, and the Division of Emergency Management. Often infrastructure and events, such as crashes, citations, congestion, are reported using reference to specific road segments or milepost locations. The ability to view and analyze this type of data in map format is key to understanding and acting on performance data. The capability to link this type of data to maps is well-illustrated by UDOT's UPLAN websites.

5. Zip Codes: Zip code tabulation areas are often used to provide summary views of demographic and other data. Zip codes were created as a tabular dataset to aid automated sorting and routing of mail. Zip codes make poor summary areas for a variety of reasons: great differences in size and population, issues with anonymity in small population areas, they rarely align with other boundaries, like cities and counties, and the fact that they were not designed by the USPS to represent discrete areas or areas where there is no mail delivery (making boundaries ambiguous). With that said, they are often the path of least resistance for summarizing data. Use them where needed but be aware of their use implications.

4. County and City Boundaries: City boundaries are often in flux due to growth-related annexations. County boundaries are not nearly as dynamic but have been modified several times in the past decade due to referendum and boundary agreements. As datasets often contain city or county for each record, Boundaries.Counties and Boundaries.Municipalities can be very useful. Be careful though, as the placename used in USPS mailing addresses doesn't guarantee that an address is within the actual boundaries of the location specified, or that the location is actual a formal municipality.

3. Public Lands & Cadastre: The School and Institutional Trust Lands Administration (SITLA)stewards a map layer (Cadastre.LandOwnership) of all the federal (BLM, USFS, National Parks, USFWS, Bureau of Reclamation, Department of Defense, DOE), and state public lands (SITLA, Sovereign Lands, DNR, and UDOT) as well as private and tribal lands. As the term 'Cadastre' refers to property records, this category, also includes the county parcels and the PLSS township and range system that is the foundation of all land ownership data in Utah.

2. Schools and School Districts: K-12 education is the largest single component of the budget for State government. Thanks to cooperation with the State Office of Education, point locations for all public, charter, and private K-12 schools in Utah are available (Society.Schools). Additionally, polygon boundaries for Utah's 41 school districts are updated in theBoundaries.SchoolDistricts map layer which is currently maintained by the Utah State Tax Commission.

1. Addresses and Geocoding: Geocoding is the process of matching a street address to map coordinates. This allows data with address-level location information to be displayed and is the first step in getting counts, totals, and other statistics by districts and other areas. The SGID currently contains a million Utah address points and address ranges along almost every road in developed areas both sourced from local government. The mapserv api allows geocoding to be performed statewide at no cost to registered users.