Earlier this month, the Land Information Records work group, an informal committee organized by Evan Curtis, the State Planning Coordinator with the Governor’s Office of Management and Budget, produced recommendations for expanding the sharing of GIS-based parcel information.

An important realization made by the group was that ‘parcel data’ or ‘parcel record’ products have a different meaning to different users and data stewards (see more detailed explanation). The LIR group focused, specifically, on defining a data sharing recommendation around a tax year parcel GIS data product, aligned with the finalization of the property tax roll by County Assessors on May 22nd of each year.

The LIR recommendations do not impact the periodic sharing of basic parcel GIS data (boundary, ID, address) from the County Recorders to UGRC per 63F-1-506 (3.b.vi). Both the tax year parcel and the basic parcel GIS layers are designed for general purpose uses, and are not substitutes for researching and obtaining the most current, legal land records information on file in County records.

It is hoped that this new expanded parcel GIS layer will be put to immediate use supporting the best possible outcomes in public safety, economic development, transportation, planning, and the provision of public services. Two quick map examples, at the bottom of this post, illustrate how land value and vacant land can be visualized from the expanded parcel information.

Another aim of the work group was to improve the usability of the data (through development of standards and consistent metadata documentation) and the efficiency with which the data sharing is distributed. 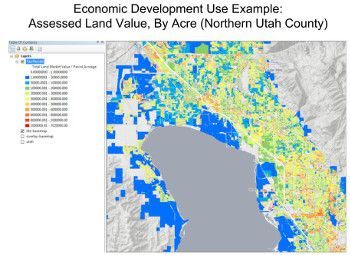 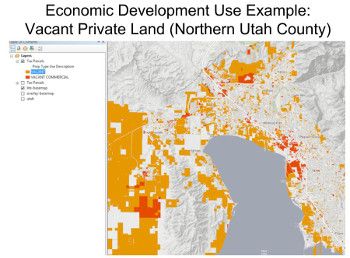