With that spirit in mind, and with the increasing focus on our transportation system working holistically to best serve our communities, there’s been an uptick in bicycle-related GIS work in Utah over the last year or two. And a portion of that work has aimed at building on the good bike map and data work performed at the municipal and county levels.

The goal of the regional, and eventually statewide, bike datasets assembled by UDOT, UGRC, WFRC, MAG, and others is to build information resources that can be used to inform not only cyclists, but also those tasked with planning and securing funding for future bike facilities. Similar to the need for GIS road centerlines data, large area data aggregation and standardization of bike datasets allows for a better inventory—and better communication of—existing bike pathways and lanes, planned additions and enhancements, and the bike network’s performance in serving community needs.

So, if you’ve got an interest or use for GIS bike data, here are some of the latest developments that you are invited to explore. Keep in mind that we are hoping that these datasets will continue to improve and stay current, so please consider how you might share feedback or data updates or otherwise help improve these processes and data products.

Other bike-related information resources that are coming soon (i.e., over the next few months): 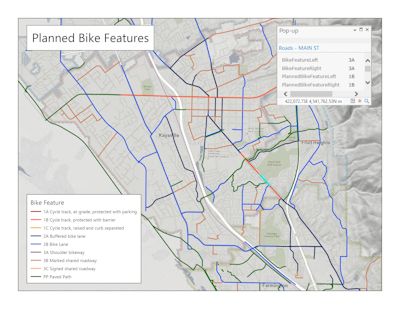